The new suite of EN 374 standards contains updated requirements and tests for gloves intended to protect users against chemicals and/ or microorganisms. We refer to this updated group of standards as EN ISO 374:2016. It provides customers with more information on some aspects of the protective qualities of gloves in this category.

It consists of five parts (each a standard):

EN ISO 374-1:2016 concerns gloves intended to protect users against chemical risks. It specifies performance requirements and the terminology and markings to be used, as well as information, warnings and instructions that must be included in the user instructions. We refer to some of these under the relevant test standards.

The standard no longer requires testing according to EN 388, but the gloves must fulfil the general requirements for protective gloves in EN 420.

Liquid or air can penetrate a protective glove on the non-molecular level by passing through pores, seams, pinholes or other imperfections in the material. EN 374-2:2014 contains two tests for resistance to such penetration.

The air-leak test: The glove is immersed in water up to a certain point and filled with air. Any leaks are identified by observation of visible bubbles.

The water-leak test: The glove is filled with water; leaks are identified by water drops appearing on the outer surface.

A number of randomly selected samples from each production batch is tested for penetration. Each batch must fulfil certain minimum requirements for acceptance quality limits (AQL). A customer may agree an AQL with the manufacturer so long as this fulfils or exceeds the minimum requirements.

Chemicals can move through a material on the molecular level. Molecules are absorbed into the material, spread inside the material by means of an effect known as diffusion, and eventually break through on the other side. This process is called permeation. This can occur without the wearer noticing any physical changes in the glove material. The glove may seem unaffected even though it no longer offers adequate protection.

The time that elapses from the moment the chemical first comes into contact with the outer surface of the glove material until it breaks through on the other side is called breakthrough time.

Test specimens are cut from the palm of gloves of the relevant glove model. A specimen is placed in a test cell, and the outside surface of the material is exposed to the chemical in question. A collection medium in the form of a gas or a liquid circulates in contact with the inside surface of the material. This is monitored and analysed until the normalized permeation rate is reached.

A sufficient number of these tests are performed to make it possible to identify, according to the requirements of the standard, the final test result.

WARNING: The tests are performed according to the standard, and the results are reported based on the normalized breakthrough times achieved under the very specific test conditions. Glove users must take into consideration the fact that each chemical had a shorter actual breakthrough time during testing. Importantly, users must further take into account the fact that real-life work situations are very different from the controlled environment and conditions of the test. Factors such as temperatures, stretching, abrasion, degradation, etc. have a very great influence on how fast the chemical permeates through the material.

It is the responsibility of employers/users to assess the test data and determine how long the gloves may be used for any given task and in any given situation. The chemical may continue to work through the glove even after a brief, interrupted initial contact. The time it takes a chemical to reach the inside of a glove should therefore be considered to start from the moment the outside surface of the material first comes into contact with the chemical, regardless of whether the glove is in further contact with the chemical or not and whether the glove is being used or not. 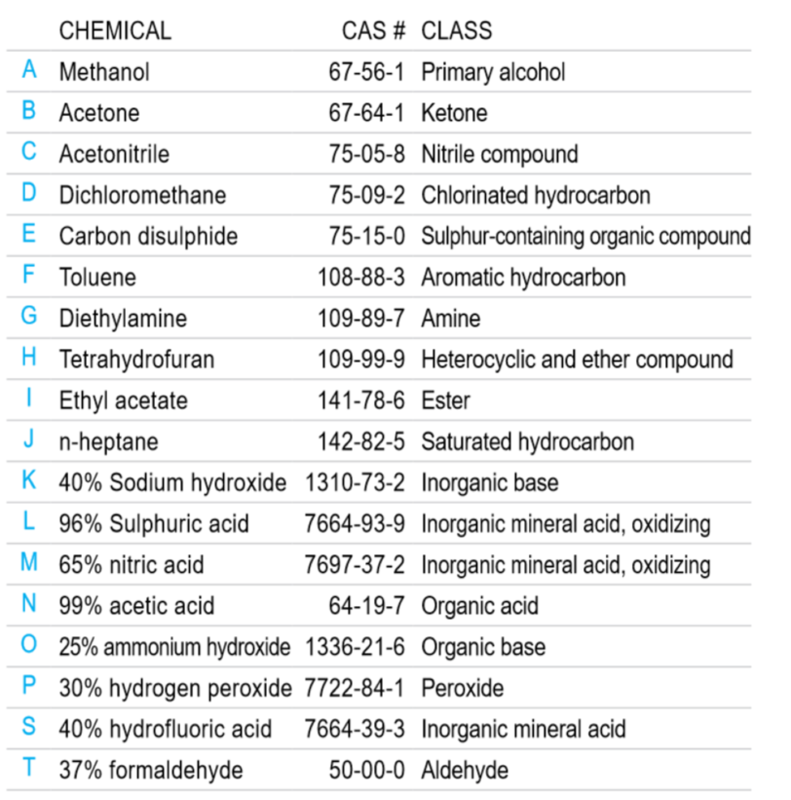 The new standard separates protective gloves against chemical risks into three categories based on the permeation test results: types A, B and C. For a glove model to be certified under EN ISO 374-1:2016, it must undergo this testing and achieve a protection level which at a minimum satisfies the requirements for type C.

Type A – Minimum 6 chemicals must reach at least level 2 performance.

Type B – Minimum 3 chemicals must reach at least level 2 performance.

The code letters of the relevant chemicals are recorded under the pictogram for EN ISO 374-1:2016.

PART 4: RESISTANCE TO DEGRADATION BY CHEMICALS

Degradation is a detrimental change in one or more of the physical properties of a material.

EN 374-4:2013 contains a test method for degradation resistance which is mandatory under EN ISO 374-1:2016. The principle of this test is to measure whether there has been a change in the puncture resistance of a glove material after its external surface has been exposed to continuous contact with a particular chemical. It involves a test for puncture resistance similar to that of EN 388:2016.

A number of test specimens are cut from gloves of the relevant model. Tests for puncture resistance are performed on both unexposed specimens and specimens that have been exposed to the chemical in question for a certain length of time. The result is based on the average difference between the force needed to puncture the exposed material and the force required to puncture the unexposed material. This difference is reported as a percentage.

For a glove model to be certified under EN ISO 374-1:2016, it must be tested for degradation according to this puncture-resistance test. The test must be performed for each of the chemicals which it is claimed the gloves provide protection against. The standard therefore requires testing for both permeation and degradation resistance for each of the relevant chemicals. There is at the moment no minimum requirements for degradation-resistance results, but they must be recorded in the user instructions.

RISKS EN ISO 374-5:2016 concerns gloves intended to protect users against microorganisms. The standard specifies performance requirements and the terminology and markings to be used, as well as some information, warnings and instructions required. The gloves must also comply with the general requirements for protective gloves of EN 420.

•  Protection against bacteria and fungi.

• Protection against bacteria, fungi and viruses.

For a glove model to be certified under EN ISO 374-5:2016 for protection against bacteria and fungi, it must pass testing according to EN 374-2:2014 for resistance against penetration.

For an additional claim of protection against viruses, the gloves must also meet the requirements for resistance to penetration of test standard ISO 16604:2004, procedure B. This test standard was reviewed and confirmed in 2014.